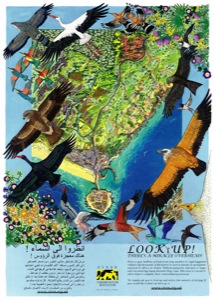 Poster created by Siren with illustrator Afra Kingdon, highlighting the miracle of the migration

“Twice a year millions of birds from tiny warblers to regal Egyptian vultures fly thousands of kilometres to nest in Europe in Springtime and feed in Africa in winter. Without passports, suitcases or maps, and encountering many hazards they come. This area is crucial to allow them to complete their extraordinary journeys.We simply ask you to LOOK UP and notice this miracle of ecology.” Siren poster

In 2002 Siren purchased a 50 acre coastal nature reserve on the southern-most tip of Spain. This terrano, known as ‘Canada de Caballo’, (‘Valley of the Horses’) is home to a diversity of flowers and plants many of which are endemic to this region. It is also directly in the path of the bi–annual bird migration between Europe and Africa. Following 9/11 the military activity in this area meant it was very difficult to work there. Recently, the site has become more accessible and through collaboration with a local conservation organisation, El Colectivo Ciguena Negra, (the Collective of the Black Stork COCN), we are now creating an exciting project on this land. As the site is an excellent viewing point for the migration, COCN intend to site some bird ringing and bird watching stations on the land. 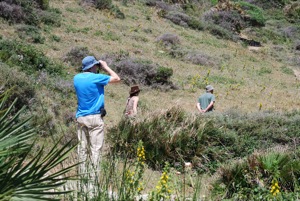 The site, run by local ecological collective, Ciguena Negra, will be used as a field classroom for children planting native flowers and trees. It will be home to interpretation points and materials which encourage other land owners to practise farming in ways more friendly to local wildlife.The site is grazed by a local cattle owner.Tarifa is poised on the brink of being spoilt, yet still lovely. The decisions made in the next few years by local businesses, governments and financiers will profoundly affect the future of this area and the birds and plants and other wildlife that live and pass through this region. It represents an ideal opportunity for conservation and as such is a very important area to work in.

Migratory animals are vulnerable to destruction of habitat in very unique ways. As they move from place to place, they need more of the world to be in a good state, and a diversity of habitats in many different countries to be kept intact. If any of their food sources fails on their journey, due to development, pollution, or even natural disturbances such as bad weather, then they die.

Migratory birds, their arrivals and departures are held deep in the human psyche as markers of time and moving seasons. The oldest known song in the English language, “Summer is Icumen in” speaks of the cucu arriving from Africa in this Northern land and singing in the summer. 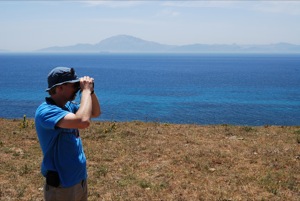 Francis with the Strait of Gibraltar and Africa in the background

You can visit the reserve by joining in the Migres programme with the Collectivo Ciguena Negra. Spend two weeks in one of the most beautiful and inspiring areas of Europe, watching the birds which have made an almost miraculous journey under only the power of their own feathers and muscles. Your work will contribute to the ongoing analysis of the numbers of birds making the journey.